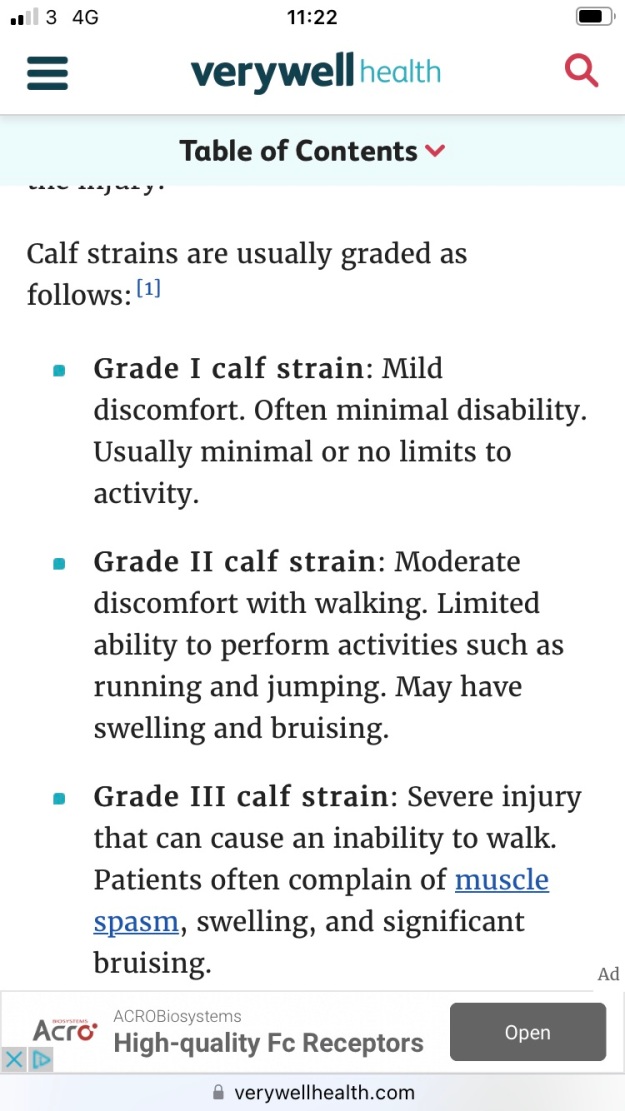 So this screenshot describes my symptoms. It seems that I have a Grade II calf strain – some swelling and bruising; I couldn’t walk long distances at the moment.

As I set off on Sunday I suffered what I would describe as a spasm in my left calf which made me yelp. Fairly stupidly I nursed it and carried on, because I hoped it was related a lack of fluid in take and it wasn’t very uncomfortable – in fact initially, I could hardly feel anything.

In hindsight I should have stopped immediately. Reading up online it seems to state that it will take 3-4 weeks to fully recover. The marathon is in 5. I am not giving up yet. I will rest and elevate and ice as much as I can. I will endeavour to prepare as if it was a half marathon and then walk/jog the remaining 13 miles. This is probably the best I can hope for.

Gutted. A little down. But not out.

Stretches in the lying position from now on. Wish me luck. I’m certainly going to need it.

The first thing that struck me was that I enjoyed the film more than I was expecting to. When something comes up as free on Prime, the cynical suspicion is that either it’s disappointing, or everyone has seen it. Neither of these are the case with Total Recall.

This film benefits from not being compared with the original (after all, can you compare Farrell with Schwarzenegger?). It also benefits from great special effects. It doesn’t feel ten years old, but rather more current. And thirdly I was pleasantly surprised by Farrell’s performance as the confused but ultimately capable main character.

I have always enjoyed Sci Fi as a genre. If you do, you will enjoy this film. Think Minority Report meets Jason Bourne, with a setting on a Dystopian earth, and you’re about there. The similarity with Bourne goes further, in that when Quiad realises that he has lost his memories (or had them replaced), he goes in search of a safety deposit box stocked with passports and cash.

But don’t make the error of thinking this film is completely predictable. The twists near the end of the film, in particular one when it seems all hope has now gone, and another when it seems that hope has been restored, are not entirely expected – and feel fresh and exciting. When you’ve seen as many films as I have, that’s something to celebrate.

The two female characters (Beckinsale and Biel) are gritty and the opposite of soft in combat; there is no hint of them being completely reliant on a dominant male, quite the reverse at times, and the sheer determination of all the key players throughout a plot which seems to be against the protagonist from start to finish, is admirable in itself.

So settle down with some pop corn one evening, or ice-cream if you’re not a fan of bits in your teeth, and enjoy Colin Farrell at his best, some intense action, and a plot which although slightly predictable at times, delivers some pleasant surprises. 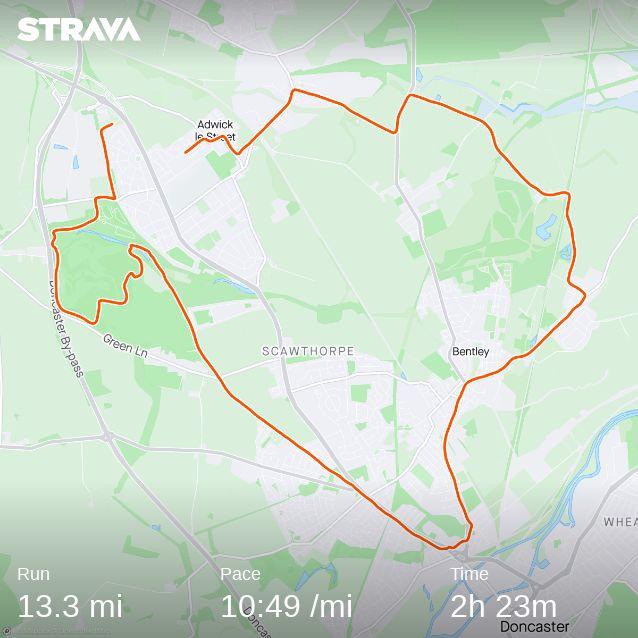 I really need to get to 16-18 miles before the end of August. No pressure!

I’ve completed 11k in the heat today and it wasn’t easy, but I’m hoping this will be good prep for the 14 miles I’m aiming for first thing on Saturday.

One consequence of training that I’m enjoying is feeling healthier on my days ‘off’. And I’m trying not to worry too much about what I eat, the odd sweet treat is reasonable I think!

I’m also looking forward to running the longer runs with friends. Running alone is harder in some ways.

I go back to work at the start of September (although I will be in from the A level results day onwards on several occasions). The London Marathon is just one month later! So effectively there are 10 weeks to go…

This morning I got up early to avoid the heat of the day and ran along the River Don into town for about 6.5 miles in 1 hour. I then ran the Sandall Park #parkrun (another 5k).

I was really pleased – I only just made the start of the parkrun – but my pace was good to say this is the furthest I have run since the week of the Half Marathon.

So, the next 6 weeks are critical. I can’t afford to get injured, and it’s imperative that by the end of August I can run 16-18 miles. No pressure.

My feet are now a little sore, and I certainly won’t be running in the next 24 hours, but I’m hopeful that I’ll get a few runs in at RAF Cranwell this coming week. I’m there from Monday to Friday on cadet Officer training.

Hope to see you on the other side!

Although smaller than its counterpart, Menorca packs a holiday punch. The hotel we visited was the Royal Son Bou, located on the south coast.

The airport was clean and well organised. The transfer from Mao (pronounced ‘Mahon’) took less than 35 minutes, and the hotel itself was – as advertised – ideal for families with kids aged 2-11. The food was good including lots of Italian and simple Spanish influences, with a smattering of local fish dishes and Menorcan pastries (highly recommended to you).

Compared to the other two resorts we have visited with both the kids (Hurghada, Egypt, and Majorca), it’s very similar in structure with activities for kids and adults throughout the day; some dry and some pool based.

My daughter really enjoyed the pool, and I particularly enjoyed archery and rifle shooting.

It is always a shame I think to visit a new country or island and not explore a little. It only cost about 80 Euros to get a private transfer and tour. In the port of Mao lies a small but very interesting island, Illa del Rei (or ‘Rey’ in English).

Unlike a typical Spanish tourist spot it combines history (military and medical) with a modern art gallery and a highly commended restaurant. It has a band of volunteers, one of whom we met – thank you again, Alison – and a tour in English which your hotel or tour operator can arrange for you. The tour is worth it – just walking around doesn’t give you any of the back story regarding how and why the hospital has been transformed into a museum with a range of medical paraphernalia – including what look like instruments of torture!

There are also many interesting historical stories about what was once the largest military hospital in the Mediterranean, serving Spanish, British and American sailors.

I won’t spoil your potential visit by saying more, but go if you get the opportunity.

Overall, we’ve had a great week soaking up the sun and working hard on our R&R. The hotel and the island of Menorca have assisted us greatly in this challenging cause (especially with two beautiful terrors in tow). We thanked the staff at the Royal Son Bou on departure for everything they had done to improve our stay.

Having completed a half marathon I’ve been feeling good psychologically. I really appreciate the messages of support I received during and afterwards.

Unfortunately on an attempt at 10+ miles whilst on cadet camp I managed to strain my right calf. I’m hoping it will be ok to run on again in a few days, but this is a slight set back.

Cadet camp was a great experience and I felt privileged to support such a successful camp. The senior officer said it was their ‘best camp of the last twenty years’!

Have a great summer, everyone!